It was a Saturday morning during my stay  on Langkawi when I went to one of my favorite place for a Malay-style break fast with a Roti Telur and a black tea, I sat on table in which on the opposite side there was a Swedish guy Adam, I really didn’t think twice to sit down close to him since it could have been potential chance for socializing instead being on my own, even not sure  whether he wanted to do so he was the one approaching me first. As we were disclosing some facts with each other, the guy came up with the spontaneous question: “Do you have any plans for today?”

My answer: “Well, I have in mind to visit some waterfalls but it’s just a small plan”

His counter-answer(offer): “would you like to join me for kayaking?”

My answer: “Well, why not, I can postpone my trip to the waterfalls, long time is been spent since last time I kayaked, just I’d need to pack my stuff”

Still, the guy wasn’t pretty sure whether I could have participated, so he phoned the tour organizer (Mangrove tour at Klim Geopark) who confirmed to Adam that there was one more place for me, so I didn’t hesitate to switch my plans and get ready for such a challenge which I didn’t consider it at all and I was provided with the needed basic equipment, moreover it was one more great chance for a new Go-Pro recording session.

The guy who organized the tour picked us up by car and brought us to the starting point for our riveting trip. Once on the place we met with three girls from Singapore which were with us on the kayaking trip, they said they never experienced before, however that wasn’t a problem if I consider I kayaked only one time about four years ago!

We were six of us altogether by including the ranger guy who leaded us for the right path to the eagles bay. As first, we got to kayak through a watered swamp which looked apparently insidious but in fact it was nothing scary then especially when comparing with my last kayaking trip which was made on a river with lot’s of downfalls and spread-ed rocks 🙂 At one point the ranger just warned us about the fact that a part of the swamp is dangerous for swimming because of the 70% of chances to end up swimming with the piranhas :O . However, we didn’t see any and we kept enjoying our paddling job as best as we could!

Here below there’s the video of the first and most impressive part of the Kayaking session:

We had a break half-way to the Eagles bay to let other kayak to pass on their way back, then we continued till our final stop. The surrounding landscape with the cliffs was simply breathtaking and moreover it was impressive to observe the way how the red eagles fluttered around from the top till the bottom, they were seeking for food and not far from us there was a boat which was feeding them so they got attracted, ‘unfortunately’ I did not carry on the waterproof box my professional camera since I was afraid of the water splashes which could have damaged the display so I just tried to take some pics by using my smartphone in addition to the GoPro.

Here below there’s the video at the Eagles bay, it must be watched carefully 😉

After such a great Eagles show, we started kayaking back to the starting point, at one point the ranger adviced us a spot in the swamp for enjoying some swim and dive jump from a horizontal trunk tree as shown on the GoPro shoots below. 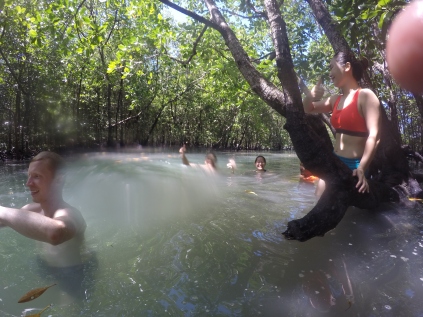 Selfie at the swamp

We had enough fun with that, just a pity that the seabed was not clear, but it’s okay we couldn’t have everything perfect!

Once we were back to the starting point, we were provided with a lunch package including some refreshments as well, unfortunately here I don’t have any picture to show you because my (old) smartphone get ripped off by a monkey on waterfall trip next day, I will save your energy from understanding what exactly happened but instead I’ll talk about that on my next article 😉

Still the trip itself was not completely over, just kayaking session was over! As we were done with the lunch, we were brought by boat to visit some caves nearby. At the arrival we were greeted by a cute monkey going around and probably seeking for food as usual here! The landscape surrounding the caves is mostly swampy with plenty of bushes, however the caves themselves were not so impressive overall, if you consider that in my home-country Italy there are much bigger caves than this one, anyway it still deserves to be shown with few amazing pictures:

In conclusion, although I prefer more individual tours, the guided tour at kayaking at Klim Geopark turned out a unique experience which must be enjoyed since Langkawi itself is more about exploration in the wild nature than swimming and diving, besides that, the Mangrove tour guy himself knows how to arrange the tour by showing a great sense-of-humor which is very important to convey to people who want to enjoy kayaking on a wild great surrounding nature. Even the price of 220MYR (almost 50€) may seem high, it is worth every single ringgit, if we consider we were provided with a nice refreshing small lunch after kayaking and then they brought us to visit the caves, such a trip nicely suits for a Saturday trip on Langkawi. Definitely recommended!

For more informations about their activities you can check on their FB page: https://www.facebook.com/croctravelslangkawi/

Last thing but not the least, a special thank to Adam who tagged me along this amazing trip otherwise I’d never have thought of kayaking on Langkawi :O

2 thoughts on “Langkawi: a riveting kayaking experience to watching the red eagles at Klim Geopark.”

This site uses Akismet to reduce spam. Learn how your comment data is processed.

Sign up below for a weekly newsletter with the latest blog posts and exclusive content. In your inbox every Tuesday!